The wreck of the Caribsea, a freighter that was sunk 15 miles off the coast of North Carolina (in the United States) during World War II, is a favorite hangout of the fierce-looking but docile sand tiger shark (Carcharias taurus). During the summer months, large numbers of sand tigers can be found around and even inside of the wreck, to the delight of divers who come from around the world to experience the thrill of a combined shark and shipwreck dive. On this particular day, a massive school of tiny fish (collectively known as “bait fish”), was swirling above the wreck at depths of between 40-80 feet. This was the largest bait ball that many of us had ever seen off of North Carolina. Several dozen sand tiger sharks, averaging 5-10 feet in length, were slowly swimming in and out of the bait ball. The sharks were not feeding, as they prefer prey that is a bit larger, such as snapper, jacks, and small stingrays. 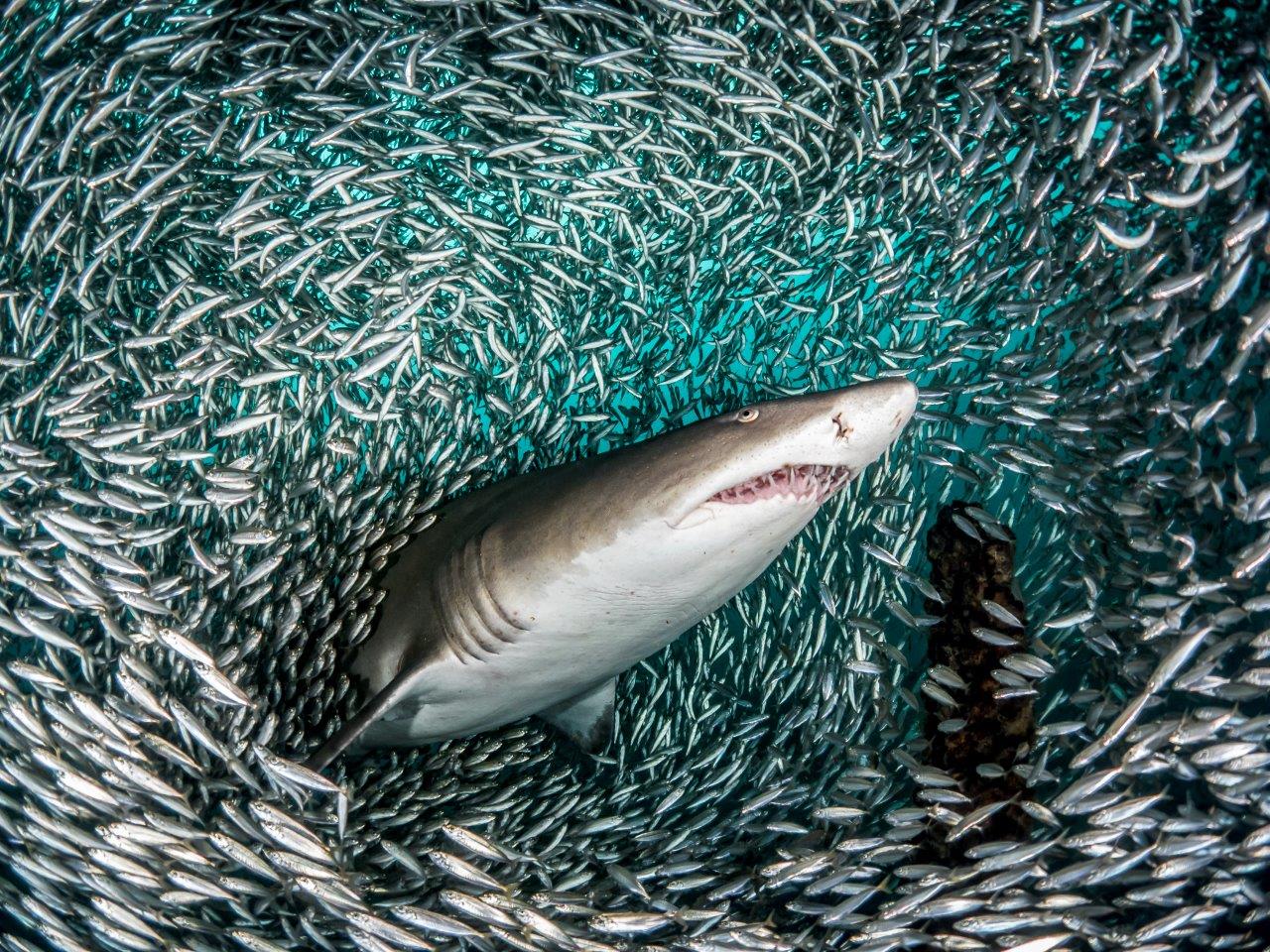 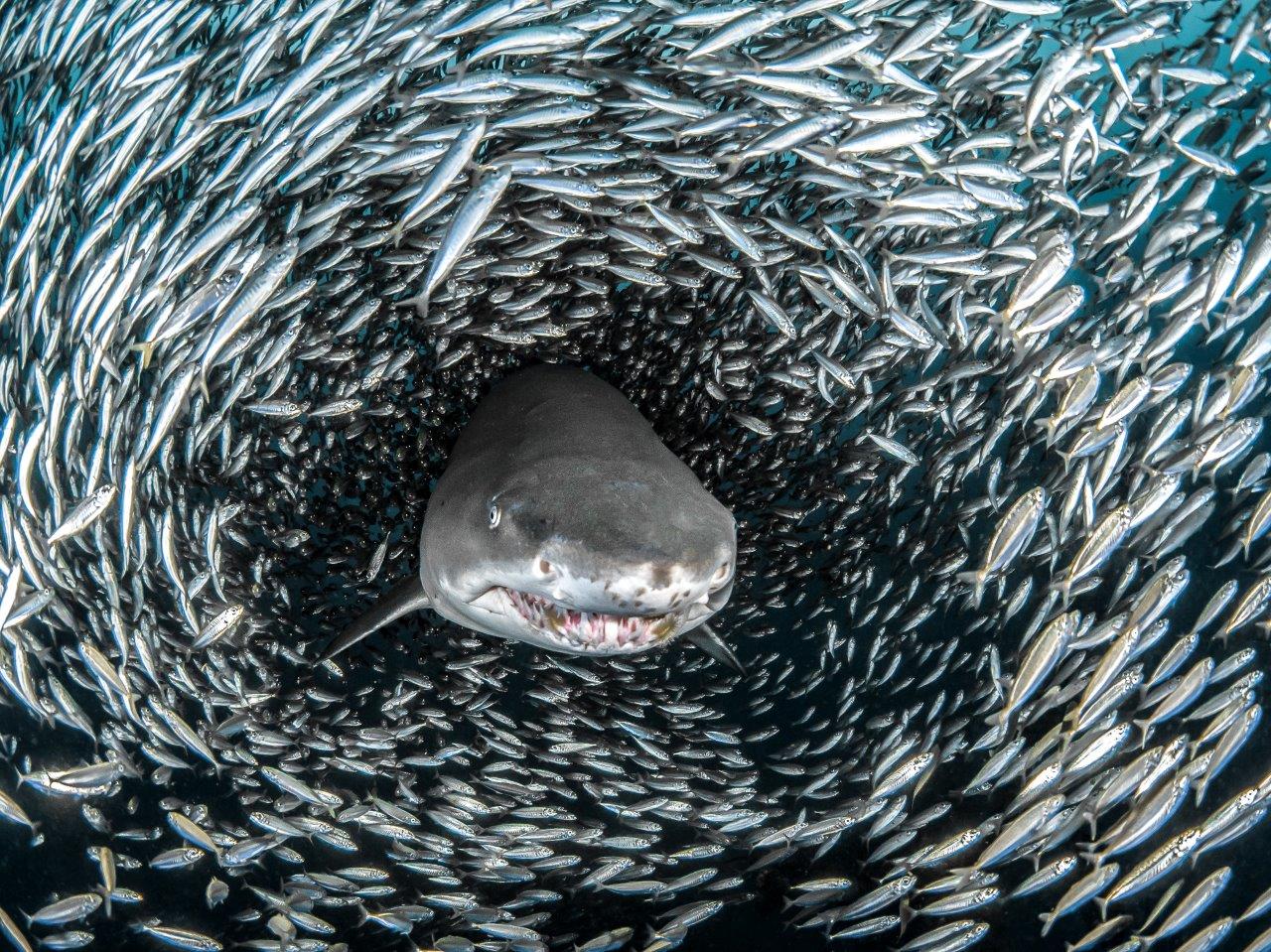 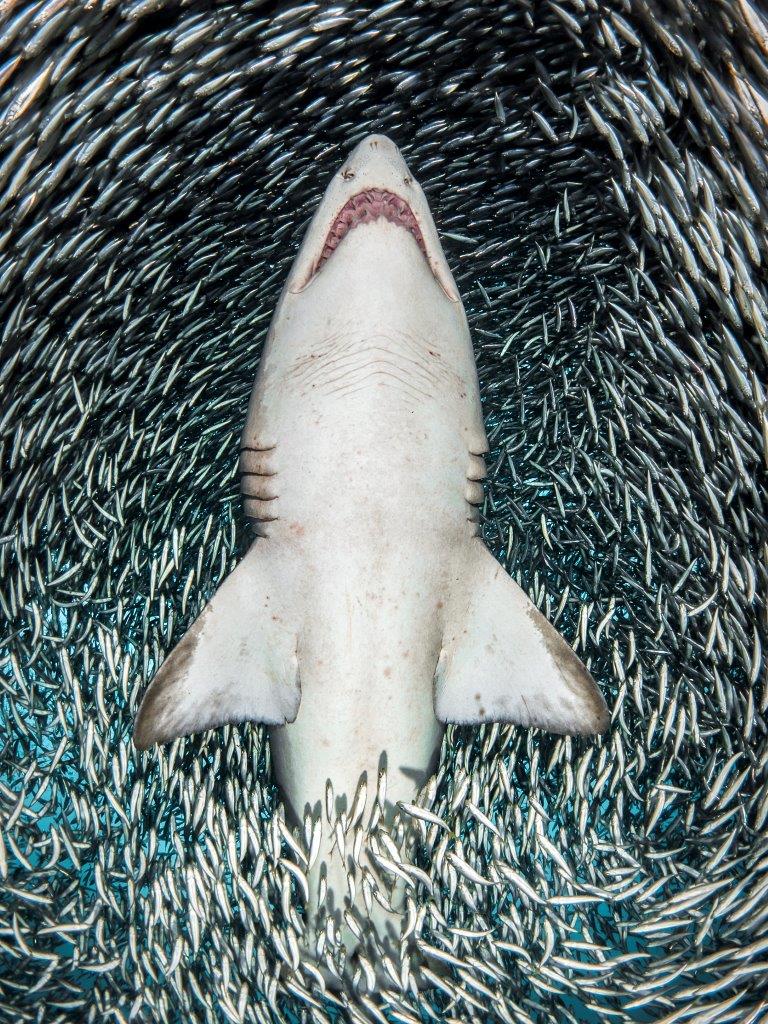 To capture this set of images, I edged closer to the bait ball until I was completely surrounded by the fish. The fish were packed so tightly together that they nearly blocked out all of the ambient light, and it was often difficult to see a shark approaching until it was only 1-2 feet away. To capture the image of the underside of the shark, I slowly transitioned to swimming on my back underneath her, while trying not to startle her. I positioned my camera to vertical and set my strobes to about 1/3 power so as not to blow out the highlights on the very-reflective fish surrounding the shark. I also had to time my breathing so that the bubbles I exhaled would not be in the frame. As I swam underneath the shark, the fish parted way, giving me a clear shot of the underside of the shark, and also one of my most unforgettable moments yet as an underwater photographer. The image that has the appearance of the sand tiger moving through a “tunnel” of fish was taken in much the same way, except that the shark was moving toward me inside the bait ball instead of over me. The tunnel effect is due to the fish parting way around the shark as she moved forward. In the third image in the series, the very top of the wreck of the Caribsea is visible. It is easy to forget that we were actually diving a shipwreck that day because the fish were often obstructing the view of the wreck. But I wanted to try to capture an image that showed a shark, the fish, and at least some part of the Caribsea.

My personal preference is to show as much detail as possible in my images, and so I tend to shoot at a high shutter speed (usually between 1/250-1/320) to freeze the action of the animals I am photographing. To compensate for the fast shutter speed, I open up the aperture to let in more light (for the images in this series the aperture was around f/4). Strobe power and placement is critical for even lighting and proper exposure. Because I am shooting with a fisheye lens I have to be very close to my subject, which requires my strobes to be pulled in closer to my housing so that there are no gaps in light in the center of the frame (for this series I placed my strobes about 12 inches to each side of the housing). And because I am so close to my subject, I keep the strobe power at only about 1/4-1/3 so as not to blow out the highlights. From a composition standpoint, I am always looking for new and unusual angles from which to photograph my subjects (while always prioritizing safety, of course!). If I could offer a piece of advice to budding photographers, it would be to move around and experience your subject from different viewpoints. Challenge yourself to show your subject to the world in a way that people may have never seen it before. I try to do this with my shark images, in the hope that I can inspire people to learn more about sharks and want to protect them.